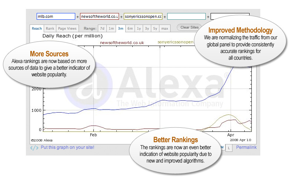 “We’ve been working hard behind the scenes for several months and are excited to announce that our new Alexa Rankings system is available”, says the statement in Alexa official website. The first impressions of some of the so-called “A list” bloggers are negative because their blogs dropped. Daw Web Hosting blog went up but I don’t care about Alexa. Anyway, let’s see the first comments.

“Oh well, I Alexa is horribly inaccurate. It has shown Clicky’s traffic as basically plateaued over the last 6 months, when in fact it has more than doubled during that time”, says Sean from GetClicky.

“I still prefer Compete.com…. in fact, I bet this “change” was in hopes of catching up with Compete and Quantcast”, writes Thomas, a reader in TechCrunch blog.

He asks why won’t Alexa rank websites the way Compete and Quantcast do, which according to him is by monthly unique visitors. “Alexa is on it’s way out of people’s hearts and minds”, add Pierre.

Winston from Techykid says this is a good move for Alexa. “The results they give before are less reliable, or not at all” adds blogger.

“Even the fact that our rank has dropped from 5k to 8k does not make me mad when I see that Alexa data is now much more accurate then before”, posts Pavel from web messenger service ILoveIM. “Finally the countrie’s traffic numbers are way to closer to the real information we have from Google Analytics” adds he.

Pavel also comments that it is even better that he can now see more realistic “side-to-side” stat numbers for his competitors. He said in his TechCrunch commentary that he checked the stats of several of his competitors who shared their data from Google Analytics with him and he could say that Alexa now provides him with details closer to those in Google analytical tool.

** If you find this article useful please subscribe to Daw Web Hosting Blog with FeedBurner.