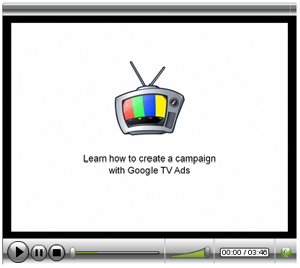 Google made another move that shows why the company is a undisputed leader in Online business and why does the company expands its influense traditional media markets. The company announced today that it is opening up Google TV Ads to all American AdWords advertisers. The Search engine has tested TV ads for 10 months since June 2007.

Google said in their blog that the research shows that 37% of online search users were prompted to perform a search as a result of exposure to television commercial. Now the company allows its customers to launch an advertising campaign in the national television channels from their existing AdWords accounts.

But to launch TV commercial is rather complicated for small businesses then to run online ads. The Search engine has calculated this and it enables its advertisers to access a “Ad Creation Marketplace”, a directory of professionals who help advertisers to create their TV commercials.

The production of a video clip which can be bradcasted as a part of a TV ad campaign through Google AdWords will cost advertisers anywhere from $100 to $1,000.

The Search engine annunced that for a limited time it will cover the cost of TV ad production, up to $2,000. To benefit of this offer advertisers have to create their TV ads through the Google’s “Ad Creation Marketplace” and must start broadcasting them by June 30, 2008. Another requirement is the campaign to run for no less than 4 consecutive weeks and its average costs to be $2,000 per week or more.

How to start running TV Ads with Google? Watch the featured video.

10 Great Years. Why To Admire Google

$21 Billion In Online Advertising. Not Bad!