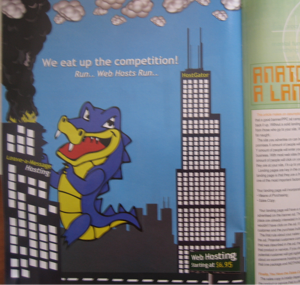 I believe that any business looks just like the way it promotes itself. When your message is intelligent or inspirational it makes people to think about the things you say. Those who send messages like that have probably spend time and money to transmit their business philosophy. But what do we have to think about a business that sends stupid message with its advertising campaigns? Can we trust a company like that?

Take a look at the above picture. It’s from HostGator’s print ad in PingZine hosting magazine. It is probably aimed to be funny but actually this is the most bad-mannered advertisement I’ve ever seen from a web host. Let me tell you what do I see on the ad.

A fake dummy crock which conducts terrorist attack agains its competition. The sign in the middle of the ad says “We eat the competition. Run Web Hosts, Run…”. The snappish lizard attacks the building next to the fake HostGator’s skyscraper. The victim’s is thoughtfully named “Leave-a-Message Hosting”.

I really believe that some of the well-established web hosting companies or anyone else can bring HostGator to court because of their offensive style of advertising. It suggests the idea that business is about destroying the competition and that “attacking” and “offensive” behaviour are business as usual.

The point is not just this HostGator ad is rubbish (not funny). It is not just a joke which says that a no-teeth fake crock can eat someone or something. It unfortunately shows the way shared hosting gone – to an industry in which businessея treat their customers as a recipients of foolish commercials.

I’ve already expressed my opinion about HostGator’s ads in another articles titled “Junk Advertising? Don’t Promote Your Web Host This Way!“. It is highly negative and I don’t believe a company which promotes itself this way can serve good its customers. Of course every story has its back side – people who read this to get interested of HostGator and to become customers of this web host. I have to say to anyone of my readers that this blog is not about web hosts. It is about consumers.

You’d never see here fake reviews or unbacked statements about who good is any web hosting company. So don’t convert this article into sales in favor of a company which I believe doesn’t deserve it.