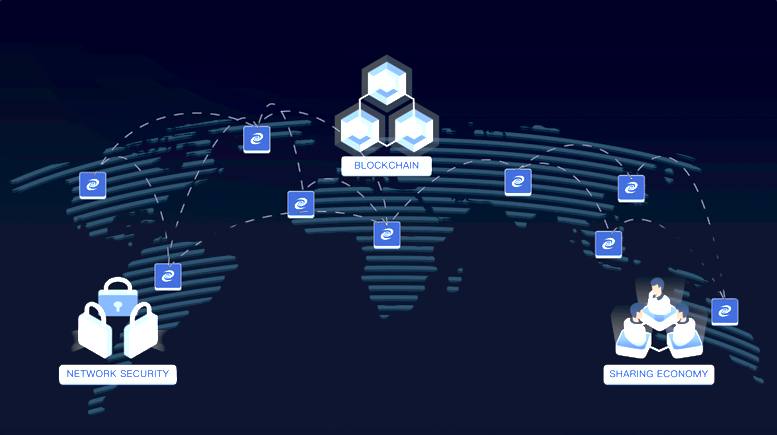 Deeper.network makes a bold claim that it would be “the world’s first decentralized blockchain network for building a truly private, secure and fair Internet”. The company – Deeper Network Inc. – was founded in 2018. Since then the company is “building” Web 3.0 infrastructure and an accessible gateway for Internet users. Almost three years down the road did not bring a product or the so-called “Deeper Network”. In March and April, however, the company launched an ICO, which is expected to fundraise and kickstart the project.

On its website Deeper.network states that it combines blockchain, network security, and sharing economy to create a global peer-to-peer network that empowers the real users of the internet and paves the way for the next generation of the web.

Like all other blockchain projects Deeper network also makes a bold “political” statement – “We are dedicated to making blockchain tech accessible and easy to use for the masses.” Deeper.network claims that it will do:

In the so-called Decentralized Private Network (DPN), each device should serve as both client and server and their IP address will be automatically changed based on their routing rules. A VPN device named “Deeper Connect Mini” that is expected to be produced by “Deeper Network Inc. should be able to establish up to 16 tunnels to other VPN nodes all over the world. The default locations are the United States, Europe, Singapore, and China.

If a user in Germany wants to access US Netflix, one’s device would automatically borrow a U.S. residential IP address of another DPN user to avoid being geo-blocked. It is no brainer that Netflix, HBO will not be happy with the idea of a global network that prevents them from controlling the content distribution on their platforms. The Deeper.network is supposed to allow every user to browse the Web “without restrictions and bypassing firewalls”. Deeper.network claims that unlike the traditional Virtual Private Networks (VPN), its Decentralized Private Network (DPN) has the following “advantages”:

Smart routing refers to the automatic configuration of network routing based on data stream characteristics, and whether to transmit through a tunnel. The IP address of the users will be changed based on their routing rules and tunnels will be established to a different geo-location.

This is not a feature that the major content producers would be happy about. What “Deeper Network Inc.” basically wants to do is to give millions of abusers the ability to bypass copyright laws and to access content in regions where they are not supposed to do so. Possible creation of a “Deeper Network” would allow Internet users on this projected network to access expensive content – movies, TV shows, sports, etc. in regions where this content is not supposed to be distributed. Such a network project would send the Digital Millennium Copyright Act (DMCA) and other similar laws into the trash can.

Each “Deeper Connect Mini” node should work like a firewall “configured to prevent network attacks through network scanning such as overflow attacks, injection attacks, denial of service attacks, etc.” DPR (tokens that should be released by the Deeper.network) can be used for purchasing Deeper nodes on-demand. They can be used as a cloud firewall to hide users’ IP addresses and prevent network attacks. The projected Deeper.network infrastructure should also allow for hosting websites. The DPR token could be used for AtomOS updates, threat database updates, and security subscription services. Tokens can also be earned for contributions to network security, such as discovering and reporting malicious behaviors on the network.

Deeper.network could be used as a platform for hosting decentralized software applications (dAPPs). Developers who are not on the Deeper.network would need to stake a certain amount of DPR tokens to have their apps hosted on its infrastructure. Their applications must be able to accept DPR as a form of payment.

The most important product of the company and its network is named “Deeper Connect”. It is described as a “portal to Web 3.0” that “transitions users into the future of the web”. “Deeper Connect Mini” is described as “World’s 1st Decentralized VPN & Firewall – For life”. unsurprisingly it is a vendor lock-in product, a hardware device that sells at $249. It is supposed to: safeguard user’s data, increase privacy, protect all IoT devices, block ads, malware, and trackers. Deeper Network Inc. promises that “user data can never be logged, leaked, hacked, or subpoenaed”. A layer 7 firewall secures the user’s entire network. It blocks ads and trackers, monitors web traffic, and filters NSFW, NSFC on all internet devices.

It is unclear, however, why Internet users should spend money to buy an expensive firewall, which allows a 3rd party to leverage their internet connection and their physical location.

Deeper.network says that they “embrace net neutrality and believe private and secure access to an uncensored internet is a fundamental human right”. It is a message that sounds quite populist, isn’t it? The company also underlines that their business model is “the sales of hardware and enterprise licensing of firewall security features”, not the sales of people’s data. At the same time, any of Deeper.network’s devices would work as black box in many people’s homes, giving a private company control over their networks.

The company describes its “Deeper Connect Mini” VPN device as a “plug & play hardware combined with a user interface that ensures privacy and security are approachable for everyone”. The producer promises a “magical user experience” with zero technical knowledge required from the Internet users.

In addition to the VPN devices, it sells, which would help from establishing a global “Deeper Network”, the company has launched a public sale. It has promised to change the Internet, but what it is more likely to achieve is to become an enabler for copyright abuse on a global scale.

Decentralized Web Might Not Overperform The Cloud Anytime Soon