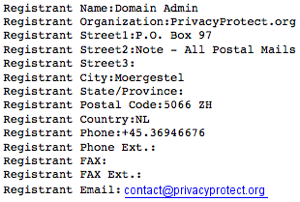 I hope that the negative promotion I give to this web address worth’s the money its owner would make from recommending HostGator’s services. The whole website is actually about HostGator. Well there’s nothing wrong with publicity. But when it comes to reference and consumer reviews it is wrong to trust a website (a blog in our scenario) which does  state its ownership or relationship with the providers recommended on its pages.

In HostingCoupons’org case it is even worse. When you go to Whois.sc to who is the domain owner, it says that the registrant is from Dutch village of Moergestel. However the  phone number +45.36946676 in the whois database is Danish. The email contact is [email protected], an address which is aimed to display instead of the real one.

I’ve never seen so many ads that refer to one and the same web hosting company on any other web hosting related website around the web. It is cheap and it insults consumers’ intelligence. It is reasonable question is whether this blog belongs to HostGator or it has a real owner, someone who’s crazy about this web host. I hope there’s a real person behind. Otherwise it is not good for the company which is so heavily promoted on the so-called hosting coupons website.

Be the first to comment on "HostingCoupons.org. Is HostGator Responsible For This?"