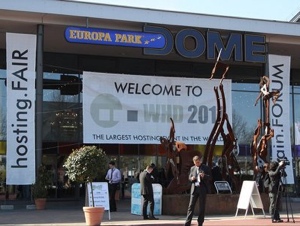 This years World Hosting Days 2012 expo and conference will take place in Europa-Park Rust in Germany, the same place where 2011 event took place. The organizers says that everybody who wants to know what the next big trend after the Cloud could be should mark a dates March 20, 21,23 in one’s business calendar. WHD.global 2012 is supposed to be the largest B2B event of the web hosting industry.

The online registration for visitors has been opened a few hours ago. The Daw Blog readers are granted code – M91E1YXX – which waives the registration fee for the World Hosting Days (WHD) 2012.

In 2011 WHD welcomed about 3,500 professionals involved in the web hosting industry worldwide in Europa-Park. The organizers of Intergenia the European WHD has also hosted Asian even in Bangkok named WHD.asia and also organized a number of local web hosting events in Europe branded as WHD.local. This year WHD team will host two Asian events. WHD.India takes place June 2012 in Mumbai, India and the traditional WHD.Asia is taking place in Bangkon, Thailand on June 14 – 15, 20012. The WHD team has quite ambitious plans for 2012 and plans to organize a Middle East and South American events. The main World Hosting Days which takes place in Germany has been branded as “.Global”.

“During all four event days the visitors will find ample opportunities to get an update on current developments in the industry and foster their networks. The WHD concept comprises a trade fair, keynotes and social events. Thus, no crucial aspect of a decent business gathering is left out and the agenda accounts for much diversity. Also Europa-Park’s attractions provide a lot of diversion; they will be open exclusively for guests”, says WHD team.

The WHD attendees will see OnApp, Microsoft, Dell, Parallels and HP in the exhibition center branded as “hosting.FAIR”, Those five companies are “Diamond Partners” to the show. Other brands like AMD, Fujitsu, Intel, Samsung and Verisign are also in the list of nearly 100 partners of Word Hosting Days 2012.

“On the central stage called main.FORUM distinguished masterminds from the hosting world will pass the mic to one another. An exciting look into the future will be taken when the question is raised what the next big thing after the cloud might be. But the experts also approach current security threats and present solutions to make data traffic over the internet even more secure”, promise the organizers of “WHD.global”.

Anyone who wants to register and attend to the conference can register at web web site of World Hosting Days. A standard ticket costs 349 euros while the VIP status with many exclusive privileges is billed with 999 euros. Do not forget to use the complimentary registration code – M91E1YXX – to waive the fee. It has been provided to DawHB.com from World Hosting Days. The blog is a media partner to the event for fourth consecutive year.

Be the first to comment on "World Hosting Days 2012 To Discuss Life After The Cloud?"