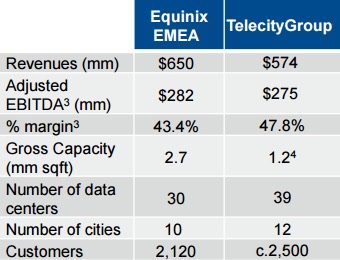 The biggest story in the IT Hosting market this summer (and probably the story of the year) is the acquisition of TelecityGroup by Equinix. It has been announced that Equinix will buy the European data center service provider for $3.6 billion, a deal that should make Equinix undisputed leader in the data center market worldwide.

As TelecityGroup is Europe’s largest data center network and service provider with a market cap of €1.98 billion ($2.17 billion). Its acquisition by Equinix is expected to have significant impact into the IT hosting market on the continent?

What the TelecityGroup acquisition gives Equinix?

Equinix bid and subsequent acquisition of TelecityGroup came in response to proposed Interxion-TelecityGroup merger. Should it happen Equinix would loose its chances to dominate the European data center and IT Hosting market in a long term.

TelecityGroup used to operate very well connected, resilient and secure carrier neutral data centers in all European cities. The company’s has established itself as an IT infrastructure service provider in all European cities and countries where it is presented with one exception – Istanbul, Turkey where, due the the specification of the local telecommunication market (monopolized by Turk Telekom), Telecitygroup bought Managed Hosting service provider SadeceHosting.

The Bulgarian and Turkish facilities, TelecityGroup bought in 2013 were important expansions which would help Equinix to increase it’s infrastructure and Cloud offerings in South Eastern Europe, Turkey and in the Middle East.

The new improved IT ecosystem would have a number of positive effects on Equnix business in Europe in many areas.

4. In position to launch various new generation of Cloud services and to redefine the networking business in Europe (through various services such as geographically dispersed Cloud IaaS, Cloud-based HA services, etc.).

5. Dominant position in the European and global Internet exchange and peering market (with or without future acquisitions of any well established European Internet Exchanges).

6. A possibility to become on of the primary providers of content and app delivery solutions in Europe.

How would the deal affect the EU data center market and the Equinix competitors?

1. Expansion on the IX market?

The company has its own Equinix IX IBX Internet exchange, with European POPs in Geneva, Paris and Zurich. It has also been partnering to AMSIX, NLIX, DECIX, ECIX, KleyReX, LINX and ALPIX Internet exchanges, so it is possible Equinix not to plan any future expansion in the IX market. However it is very unlikely the company to decide against growing it’s own IBX exchange in the newly acquired TelecityGroup IT ecosystem.

All this means that many Internet Exchanges would merge, get acquired or exit the business.

Being an IT infrastructure provider that hosts a lot of content in facilities connected into a private network, Equinix would launch a pan-European geographically dispersed Cloud IaaS services. With an average latency of 55 ms or less between Istanbul and London, a company like Equinix would easily launch an European peering service and would effectively enter into the European wholesale Internet bandwidth market.

I would be surprised if deals like Equinix acquisition of TelecityGroup catalyze a change in the Internet service and IP transit markets. Many ISPs and telecoms would either merge or enter the Infrastructure Hosting markets in a way to keep their business going and to effectively compete Equinix and other data center and Cloud IaaS providers. The major European telecoms monitor the market and would respond in various ways, even by trying to slow liberalization of telecommunications in the European Union.

Operating infrastructure in most European countries makes Equinix one of the main contenders to deliver various Cloud services (Remote Desktop for example) to European corporations, SMBs or even to consumers. The company would even change its business model and enter various consumer markets.

Just imagine how companies like Equinix would intervene in various IT and Cloud service markets. Equinix itself has infrastructure, connectivity, automation and human resources to design, launch and support various IT service markets and to be successful in a long run.

The Cost Of Data Center Outage Rose in 2016

Be the first to comment on "How Would Equinix Change IT Hosting Market In Europe?"