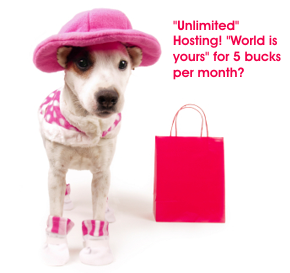 Sometimes these things happen in life. One day you are very negative about someone or something. The other day you are in position to defend them. Yesterday I posted an article about a HostGator’s ad which on my opinion is extremely “bad-mannered” . Today I should defend the same company against… spoiled customer.

I still don’t like the web host mentioned above and don’t recommend them to anyone. At the same time I don’t wish any web host to have customers like this one below. Like whom? Well, just follow the case.

I just want to share with you my experience with hostgator.com when I’m inquiring a while ago.

First, I ask them the hardware specs of the system which the customer rep provided. Second I ask if I can do multiple hosting per acct and the customer rep answer is yes. In my last question, I’m really disappointed and somehow offended with the attitude of this representative and it seems that hostgator.com is somehow over-confident on this area.

Here’s the portion of the transcript that I’m pertaining:
——————————————————————
Me: you also mentioned that your backup is weekly, why don’t you have daily backup?
Justyn: We have too many servers for that to be feasible
Me: what if the client update the website yesterday and suddenly the system got kaput whats gonna happen to his/her update?
Justyn: It would be lost.
Justyn: We do backups as a courtesy, you should still backup your own work too
Me: Yah obviously, so that’s it? I mean you are the first hosting company that only backup weekly especially for reseller accounts. Having many servers is not a concern since you are not doing a manual copy and paste. I mean you can use the cron.
Justyn: But the space that 800,000 backups take is huge
Me: Anyway, I will just think about it first
Me: Thanks to your time and have a nice day

“Is it true that nowadays backing up our files or our client files is just a courtesy?”, asks the “client”. His member name at Hosting Discussion is “JustMeph”.

“As far as I know this should be part of the service. This is the first time that I encountered a company who is not backing up daily. Especially if the client is a reseller. Hostgator is so complacent and over-confident on this area for them to just do weekly backup.”, adds the web host’s customer. He also says that his experience with customer representative of the web host named Justyn is very unpleasant.

“This person obviously needs more customer service orientation. He/She obviously don’t care about the client. He/She can maybe think of a better way saying it.”, continues the “customer” and says that “some script” can make a future client to be more confident in signing up with this company.

Hosting companies who acted irresponsible on the shared hosting market through the years by promising “the sky and the stars” to customers, now get what they deserve. The picture is very clear – a bunch of overselling web hosts of poor quality which produce a growing number of unhappy customers.

On the other side we have a large number of spoiled and irresponsible site owners who are convinced that hosting companies are obliged to do everything they want for 5 bugs per month.

Posters Are Comming Around