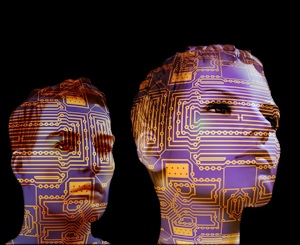 The computing industry created a terms like SaaS (Software-as-a-Service), PaaS (Platform-as-a-Service), IaaS (Infrastructure-as-a-Service). Now it looks that the financial industry is using computing technologies to create something that sounds like HaaS (Human-as-a-Service). The world’s largest hedge fund is building an algorithmic model from its employees’ brains, which is aimed to give instructions for day-to-day management as well as on hiring, firing and decision-making.

The Bridgewater’s founder Mr. Ray Dalio calles his company’s internal project “The Book of the Future”. He’s goal to create a software that would automate most of the firm’s management looks to me as something between divine and pure evil. According to WSJ’s article’s authors Rob Copeland Bradley Hope the technology project “would represent a culmination of Mr. Dalio’s life work to build Bridgewater into an altar to radical openness—and a place that can endure without him”.

We shall not deny people’s wright to spend their time and money on such goals. However, any of us would question the moral standards and values, behind certain idea, project or endeavor that might change our lives for bad.

Would You Accept A Piece of Software To Decide Your Fortune?

Some people would probably say “Yes”, if they get assured that any such arbitrary piece of software is so objective that it would decide only based on precisely outlined principles which count only whether any employee posseses the necessary professional qualifications, required for certain job or position.

Bridgewater records most meetings and its employees are expected to criticize one another frequently. Those who work for the company are “subject to frequent probes of their weaknesses, and personal performance is assessed on a host of data points”.

Many people, including myself, find hedge funds nasty by nature, but this seems to be more than that, it is really special. It’s founder’s ambition is to create some sort of AI application that should preserve his management approach. It should produce “GPS-style directions for how staff members should spend every aspect of their days, down to whether an employee should make a particular phone call”.

I don’t know whether which of those two – “obsessive” or “maniacal” – describes better Bridgewater’s founder ideas, but according to the newspaper a company’s employee familiar with the project described it as “like trying to make Ray’s brain into a computer”.

The hedge fund manages $160 billion, as WSJ reports “the most of any hedge-fund firm”. By the rules of contemporary finance capitalism, it lead by example. Birdgewater earned its clients twice as much total profit as any rival, according to LCH Investments NV, a firm that invests its clients money into hedge funds. At the same time Bridgewater’s most important fund “was down about 12% on the year at one point in 2016, causing alarm inside the firm”, despite that “its has since recovered to being up 3.9% in mid-December”.

Bridgewater staff with certain rules, set in a public manifesto known as the “Principles”. Every employee is expected to know them and strictly apply. There are instructions such “By and large, you will get what you deserve over time” as well advise from Mr. Dalio like “Don’t pick your battles. Fight them all”. It is either those principles, the pressure that company puts on its employees or anything else that make one-fifth of new employees leave within the first year. According to WSJ “those who stay sometimes are seen crying in the bathrooms”. The newspaper has published an article based on interviews with more than a dozen past and present Bridgewater employees and people close to the firm.

Mr. Dalio believes “humans work like machines”, a word that appears 84 times in Birdgewater’s “Principles”. According to WSJ, the problem, he has often said, is that “people are prevented from achieving their best performance by emotional interference. It is something he thinks can be overcome through systematic practice”.

Only by using deduction as method of thinking, the Ancient Greeks managed to come to conclusion, which has become self-evident or unquestionable and are impossible to be overturn or rejected even by today’s science. Today’s financial tycoons are setting up a future where it is very likely that “Free Will” would be privilege of few who would stay on top. In tomorrow’s economy most people would find their fortunes managed by pieces of software code, which they would not review, re-examine or reverse any of its wrong decisions. Does this sound like an utopia? Ask Bridgewater’s executives.

The original Wall Street Journal article is titled  “The World’s Largest Hedge Fund Is Building an Algorithmic Model From its Employees’ Brains”.