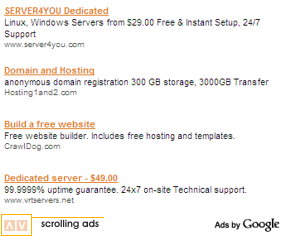 Have you seen any changes in Google AdSense ads on your pages? If not you’d better go and check your ads. Because they have changed. Now Google enables visitors of your website to scroll or slide AdSense text ads. The main question is whether this change helps both advertisers to get targeted traffic and publishers to increase their revenue. It is not easy to answer this question. But let’s try.

Any major change that Google makes in any of its tools or programs divides the public opinion. Some say all that Search engine cares about is how to squeeze more money from its users and advertisers. Others are confident that Google leads the market because of the implementation of various new useful tools. I can not judge who’s right and who’s wrong here. Let’s make something else, to say something about how do these changes in AdWords would reflect on advertisers and publishers experience.

The owner SERoundTable said that Google tested scrolling ads in some popular forums such as DigitalPoint Forums and WebmasterWorld before the decision to add them to AdSense publisher network.

The initial consumer reaction about the interaction with the new AdSense variations “was positive during the test period. But what happens when the ads web live?

I’ve spoken to 12 different site owners who display ads from AdSense on their pages. Most of them told me that their AdSense revenue when down with at least 15 %. Some even said that after the implementation of scrolling ads they lost more than 30% of the income they gained with the Google publisher program in the last month before the change.

I don’t know whether the drop in publishers’ revenue is an objective trend or it happened only to some of them. My own revenue from Google AdSense dropped with even more than average (around 35%), compared to other publishers. I don’t care too much because I use Google ads as a secondary choice (advertising program) but many people lost significant amount of their money after the change has being made.

Hope this is a temporary effect. News ads should improve the experience of the consumers. Now they have a choice to scroll for new ads if those displayed on any web page don’t work for them. The readers of Daw Web Hosting Blog for example have a choice of 15 different text ads in the 336×280 pixels ad unit. If they decide to scroll the ads there is a good chance any of them to attract their attention and to make them to click.

But this is only a speculation. There is another option. Advertisers may get discouraged if they can not find anything catchy when scrolling the ads. In case like this their experience with AdSense and the website that shows Adsense ads will aggravate.

Finally! Publishers don’t make money when consumers scroll ads on their websites. But Google charges advertisers on CPA model when their ads are shown many times but users didn’t clicks on them.