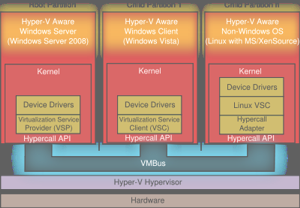 Microsoft’s Hyper-V virtualization solution has been welcomed in the VPS hosting industry mostly because it was supposed to save money on Virtualization software, compared to other Windows virtualization technologies (see comparison article “Hyper-V vs. VMware ESX“), at least when it comes to a single physical server or small business VPS networks.

The success of each new product or service depends on consumers’ appreciation. But when it comes to Hyper-V there is other side of the future success story – it is important how the web hosting providers will accept the new Windows virtualization solution.

Microsoft is betting on web hosts to demonstrate that Hyper-V can perform on large scale virtual infrastructures. The Windows producer however will face tough competition on the virtualization market. Microsoft’s goal is not to be a player in web hosting industry. It wants to conquer this market and this makes virtualization software producers like VMware, Parallels and etc to be very careful in watching Microsoft steps and in competing the Silicon Valley based corporation.

John Zanni, General Manager of Worldwide Hosting for Microsoft disclosed in an in-house interview how Hyper-V will be included in company’s Hosting Deployment Accelerator (HDA), a free blueprint for hosting projects. Zanni unveiled that 256 web hosting companies worldwide (including industry giants like Rackspace) are in process of adopting Windows Server 2008, which implies that they will probably decide to offer Hyper-V based VPS hosting.

Microsoft however will face tough competition from its present software Partner Parallels. Parallels is producers of the world’s leading OS virtualization solution Virtuozzo Containers (a software that offers both Linux and Windows VPS solutions). It is obvious that the web hosting market welcomes Parallels virtualization products and it will be very interesting how Microsoft will compete them with its “bare-metal hypervisor”.