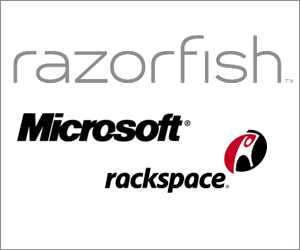 Although Razorfish is a Microsoft’s entity it operates independently as an web advertising agency. It has been acquired by Microsoft when the Windows producer acquired aQuantive in 2007.

Rackspace is probably the most respectful name in today’s hosting industry. Last year it decided to go public and has been listed on the New York Stock Exchange. It offers a wide range of Managed Hosting and Cloud Hosting services.

Cloud computing is a very important trend in technology industry. Cloud (Cloud computing) is a networking model of development and use of the computer technologies. It is used for creation and development of dynamic, scalable and virtualized IT products, that vendors provide as service over the Internet.

Cloud hosting and hosted services are very attractive options for companies that don’t want invest in building out their own technology infrastructure. In times of an economic slowdown more and more companies begin to outsource their networks and applications. According to IDC the American market for web hosting services will increase about 10 % within the next few years and will reach $14.6 billion in 2012

Microsoft announced that Windows Azure will be its new application-development and web hosting platform in the cloud. It has to be until the end of 2009.

Web Hosting Knowledge. Where to Learn and Communicate?

Something Google To Change