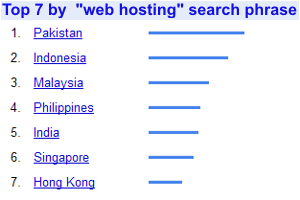 I have searched Google trends yesterday on some “web hosting” related search terms. Among those I checked were “web hosting”, “website hosting”, “business hosting”, “vps hosting”, “virtual private servers”, “dedicated hosting” and “managed hosting”. The results are a little bit surprising for me. They provide a basis for the projection that the “center of web hosting industry” is about to move from North America to another continent – Asia.

Web Hosting – From Islamabad to Wellington

The consumer interest of search phrase “web hosting” is shrinking since 2004. This year it is in its lowest level for the last 5 years. Is “Web hosting” an American or European market? According to “Google Trends”, the consumers’ interest of web hosting services in United States is relatively strong only in three major cities – San Francisco,  Seattle, Atlanta. United States aren’t among top 10 countries where consumers are interested of web hosting services. The world regions (countries) where consumers are actively searching for “Web Hosting” are: Pakistan, Indonesia, Malaysia, Philippines, India, Singapore, Hong Kong, New Zealand, Australia, and Romania.

If the data can be used as a basis of a projection of the development of the hosting market especially in its “Shared Hosting” segment we can say that web hosting is no longer North American or European market. One of the possible reasons for this is that North American market is a mature one, compared to the one in Asian continent. Most consumers of personal or small-business web hosting services have also developed their websites and most of them don’t need entry level website services.

But it could also mean that the Asia’s growing influence on global economy has significant impact on the web markets and the the variegated continent would become the Web’s new engine.

What does it mean for “Shared Hosting providers”. It means that they probably have to pay more attention on Asian markets, to analyze their development and to focus on products and services that best work for Asian customers. This probably means that markets such as Pakistan, Indonesia, Malaysia, Philippines or India that has been traditionally considered as “underdeveloped” now are becoming the main target of the producers of shared web hosting services.

For industry class hosting providers the growing of Asian economy means that they have to change their focus to provide better connectivity and facilities that serve Asia and especially countries in the region of South-Eastern Asia. The engine that will move ahead “Shared Hosting” within the next few years will be within time zones somewhere between Islamabad in Pakistan and Wellington in New Zealand.

Malaysian businesses obviously need more web hosting services than those in other countries followed by Indian and Singapore businesses.

Those who search for business class web hosting services or at least think of web hosting as a business class service are all in United States, ranked by city of residence. The only exception is Delhi, the city that is on top of the consumer interest of “Business Hosting”.

Russia came up 3rd in Google’s statistics about “VPS Hosting” searches. The data is from the beginning of 2006 and until today and show growing consumer interest of Virtual Private Servers. Top market here is Indonesia followed by Malaysia. Asian Markets dominate in this class hosting services as well with EU’s Romania ranked 9th and Israel ranked among top 10. India, New Zealand, Philippines, and Australia are also among the consumer markets most interested of VPS class web hosting.

Indonesia’s capital Jakarta is on top as a city where Internet users search for VPS hosting services. San Francisco and another Texan city – Auckland are mong top ten cities by consumer interest of Virtual Private Servers.

The consumer interest of search phrase “Dedicated Hosting” is quite interesting. After a short peak in the first quarter of 2004 it shows stable trend without any major ups and downs, although there is a sligh decrease. Asian market again leads in total number of search queries with Indian and Malaysian consumers. It is interesting that South Africa holds 3rd place. United States appears for the firs time in top 10 countries (U.S. is not ranked in any of the above hosting search categories).

Like category “Business Hosting” American cities again dominate the search rank by city. California and Florida are two of the U.S. states where consumers and businesses have significant interest on dedicated hosting products. Both Australian major cities Sydney and Melbourne are again among top 10.

There is one common thing between all above search phrases. They all show that Asian Intenet users (consumers) have a growing influence on the web hosting market. As far as all these web hosting searches refer to a commercial services and products, not to news pages, entertainment, reference sites or any other non-commercial websites, we can say that most of the Internet users who type them in their browsers are consumers of web hosting.