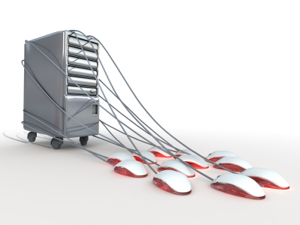 Erik Theuer, Product Manager SMB at Internet Group do Brasil asked a question “What in your opinion will be the future of our industry? (5-yr range)?” in LinkedIn “Hosting Industry group”. He offered three answers – a) Nothing will change; b) Players like Microsoft and Google will dominate with free basic hosting, charging users for value added services; b) Current providers will segment their offerings by vertical industries, diferentiating themselves through vertical applications (SaaS); c) Current providers will offer unlimited naked-web hosting, and those with larger scale will prevail; d) Other scenario. Let’s say what does the group members said!

“I believe the market will consolidate as the smaller players will be weeded out or acquired. SaaS will become a bigger part of what hosting companies do. I think C however don’t discard B happening”, this is what Robert Sandali, Sales Director at Hostway posted as comment.

“I believe we’re going to see a record amount of M&A (mergers and acquisitions) over the next few years which will shrink the number of competitors in the space tremendously. Not only with small companies targeted for acquisition, but extremely large ones as well. These hosts will then differentiate from each other based on infrastructure, price, size, support levels and vertical market targets”, commented William Platnick, CTO at ActiveHost Corporation.

He thinks that SMB’s may be able to use free offerings from Microsoft or Google, but will pay for products that perform or work better – “just like people today will pay for Exchange when they get webmail for free with their hosting accounts”.

According to Mr. Platnick the dedicated server market-place is set for a battle against “cloud computing” such as Amazon EC2 and GoGrid which can offer on-demand server virtualization and scale. “I think the only thing stopping it right now is the infancy of the products. Once the platform’s mature, I do believe we’re going to see people start to trust these providers more, and they will start to gain traction quickly”, adds the ActiveHost’s CTO.

“Many, many customers have no idea how to properly setup and administer a server. Making it even easier and on-demand to obtain these servers will keep this trend going. Companies like Amazon providing the infrastructure will not have the desire to deal with this issue, so I predict a surge in Managed services providers who will act as sysadmins on call and know platforms like EC2 inside and out”, ends his comment Mr. Platnick.

“I completely agree with William. The battle between the cloud and dedicated hosting is at hand and the smart money is on the cloud. The cloud is simply the next step in the evolution of infrastructure an its happening faster than most people think”, Dennis Kittrell, Senior Product Manager at Aplus.

He also added that the cloud was not only threatening the dedicated server space but shared hosting as well.

“Rackspace, Amazon, and Google, will definitely compete in the shared hosting space when they can hit the necessary price-point and management usability requirements with cloud services. I see this happening in less then 18 months”, posted Dennis Kittrell.

“Personally I consider a very reasonable hypothesis that in 3 years the industry will be divided into 3 groups of providers”, said Erik Theuer.

“Main difference between groups 2 and 3 is that group 2 starts addressing the very basic need of building a website, while group 3 focuses on applications for customers who “probably” already own a website. Nevertheless, this difference could very well disappear in 2 years or so”, adds Erik Theuer.

“William and Dennis are on target. The battle has begun. It is an exciting time and it will lead to the overall market expanding at a higher rate. The easier it is for customers to move the more the market will expand”, posted Freddie Garcia, Enterprise Sales Manager in Rackspace.

I don’t think that anyone would predict the upcoming mergers and acquisitions. it is more about the financial markets and about the investors’ interest in data centers, infrastructure and web hosting business.

Moving to cloud hosting is definitely a good trend and anyone who can develop and implement a branded in-house technology will be in a very good position.

A Web Hosts & Clouds – A Larger Or A Smaller One?