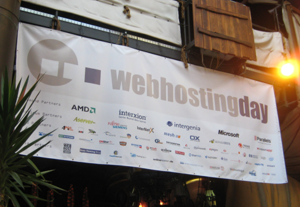 Here at WebhostingDay 2009 the mood is upbeat, and the number of web hosting companies and professionals in attendance has been record setting. Held from March 18-20 in the Phantasialand theme park in Bruehl near Cologne, Germany, this is the fifth annual WebhostingDay conference and exhibition. The number of premier conference speakers and companies represented is impressive: Microsoft, Intel, AMD, Parallels, Interxion, Aserver, Cloudmark and of course the Daw Webhosting Blog were at sponsors of this year’s event.

The proceedings kicked off with a Come Together party prior to the first day of conference proceedings. Two full days of educational sessions are now about half way through, and there have been many interesting and informative talks covering a range of topics from email security to Cloud computing, to data center hardware, to Saas. One impactful speaker was Jamie de Guerre, CTO at Cloudmark whose talk was entitled, ”Cloud Computing for Email Security”. Since Mr. de Guerre is responsible for Cloudmark’s technical strategy and product roadmap, he was able to deliver a very concise appraisal of the issues surrounding business email, security, and the logic of outsourcing this function to Cloudmark.

It was pretty amazing to see a speech about email security that was so easy to listen to, and actually made me think. I spoke with Mr. de Guerre in the Cloudmark booth at the show and got his thoughts on WebhostingDay 2009, ”I am excited about the traffic this year which has more than doubled over last year. We are having great conversations with hosting providers from around the world. I am gratified to see a messy and disparate story on Cloud computing coming together. The Cloud story is becoming consistent.” If you haven’t heard of Cloudmark or checked out what they do, you should. They power email security for the likes of Rackspace and Media Temple among many others.

Another keynote speech was delivered by Serguei Beloussov, the CEO of Parallels. The talk was entitled, ”The Next Generation of Optimized Computing” and laid out a great competitive overview of the current web hosting landscape. As expected, Mr. Beloussov pushed the theme of automation and partnering while warning of the dominance of Google. This talk captured a fantastic high level overview of the strategies and progress of the major hosting factions, and forecast an optimistic future for the growth of both traditional and Cloud-based hosting services.

Here are some thoughts from a few other attendees and sponsors that I ran into during the past day and a half at WebhostingDay 2009. Sangeetha Naik the Co-Founder of outsourced technical support company Bobcares speculated on why so many hosting professionals have attended this year’s show, ”The reason that hosting companies are coming is to step up their marketing.”

Phil Robinson, a developer and programmer with UK website hosting company, 34SP.com explained what he is seeing at the show, ”There are so many great networking opportunities here at WebhostingDay. The chance to speak with other hosting companies and vendors in one place is brilliant. I am planning on returning next year.”

Look for some more follow up posts on WebhostingDay 2009 over the coming days and into next week.

Digital Economy’s Monsters Should Be Hold Accountable For Their Policies?

Web Hosting Companies In The Pink Over The Financial Crisis?