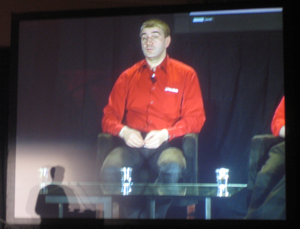 “It is pretty much marketing and less technology”, this is what Scott, a networking engineer in an Orange County based company told me in during the launch break within the first day of Parallels Summit 2009. “If my marketing director was here he would like it”, said Scott answering my question whether he likes the summit. I have expected to here important things here in Las Vegas from Parallels, things about the new cloud hosting techonologies and cloud computing. Although the Summit has been broadly promoted as a conference focused to cloud computing and upcoming market trends, my impression was that these topics were only on top of the Parallels effort to promote its own products. Of course it is more than natural summit to be focused on Parallels, since it is their own conference, and they do not charge participants for providing them with a technology skills and knowledge.

“Gain insight on your industry and upcoming market trends. Hear strategies on building your company and growing revenue in this economic climate. Foster relationships and form partnerships that help strengthen your business and the market. Learn about upcoming Parallels’ initiatives and provide feedback. Have Fun!”, this is how the Parallels Summit 2009 was promoted on the web.

We have seen a little from everything. The upcoming trends and the market change have been outlined in a few of the keynotes (a very interesting was the one held by Morris Miller, one of the founders of RackSpace). He told a story of competition between Rackspace and the Robert Marsh’s dedicated hosting provider Rackshack (change to EV1Servers, today The Planet). When Marsh created Rackshack, Rackspace have already been one of the most reputable brands in hosting business. Rackshack however has begun selling dedicated hosting, a low end servers, starting from $99 per month with something like $150 – $180 set up fee (I remember i got one from them in 2004) and this confused many people on the market.

Most of the consumers haven’t made a difference between Rackspace and Rackshak and because of the cheap prices of the Robert Marsh’s company Rackspace have lost millions. Morris Miller said that he gave a call to Robert Marsh and told him that it is confusing for customers to have both Rackspace and Rackshack, but Rackspace didn’t bring the rival in the court. It is interesting however that some of the Rackshack customers even tried sued Rackspace for poor service by mistake. Which was in on or other way a proof that mr Miller was wright.

Anyway he has to do something to respond to competition because, even that Rackshack customer service and tech support were horrible (I was a customer and I can approve this) by Mr. Miller’s words, Rackshack still succeeded to get many of Rackspace’s customers.

The Rackspace founders however decided to create a new company, and they founded ServerBeach. The new entity had been totaly separated from Rackspace and had its own data center and staff. It begun selling cheap dedicated servers for $99/month and waived set-up fees. This costed Rackshack $8.5 million. Rackspace sold the company to Canadian Peer1 and made $7.5 million. A success story?

The only thing that was missing here was how the team behind ServerBeach succeeded to market the new brand. But this is probably 50% of the business… and no one shares this knowledge just like that.

A keynote that impressed me was the opening speech of Parallels CEO Mr. Serguei Belousov. He shared his vision about the hosting industry and was very clear about where the software producers, application service providers and cloud computing companies go. “Partner, Automate, Virtualize, Standardize”, was one of the most important messages of Mr. Belousov to the audience.

This year’s Parallels Summit welcomed more than 1000 from 62 countries. It was like UN summit. This is twice more that company annual summit in 2008.

Mr. Belousov outlined the changes that computing and web hosting industry in particular experienced within the last year. He said that web hosting business is now considered pretty much as mainstream and that the conversation has been changing from hosting to software as a service (SaaS) and to cloud computing. He has also been very clear that the major IT corporations like Amazon, Google and Microsoft have already grabbed the biggest share of the cloud computing and cloud hosting.

Parallel’s CEO gave a definition for cloud computing by saying that it is computing which is offered to its users from remote, highly concentrated data centers. He said he believed that more and more computing would be done this way and it’s company was doing its best to help its partners take advantage of this trend.

What I remembered from Mr. Belousov’s speech is that any company can benefit by implementing the concept of cloud computing, cloud hosting and to succeed in times when the market is rapidly changing.

Dedicated Server Hosting. How Did It Change With The Cloud?